Cypress Retail Group has been actively involved for 2 ½ years in the repositioning/remodel of a grocery-anchored centered in the community of Eagle Rock, in northeast Los Angeles. The center, located at the northwest corner of Eagle Rock Boulevard and Yosemite, was originally built in the early 1960’s. Over time it had become dated and tired, and the grocer (Super A) was underperforming by any standard. In early 2013 the owner retained Tim Genske, who began actively marketed the supermarket space to a variety of specialty grocers, discounters and retailers. At the same time he worked with ownership to engage a highly regarded retail architect to develop drawings to remodel the entire center. After 18 months and a highly competitive process, a lease was executed with Sprouts Markets. Sprouts will open mid-2016, following the multi-stage remodel of the center, including replacing the entire electrical service to the center, re-paving, the addition of outdoor patio dining areas, and the re-leasing of several other shops.

“This was an extremely complicated and expensive process for the client and it’s still not over” said Genske. “We really wanted to reset this property to serve the Eagle Rock community as it’s been evolving the past 10 years. We chose Sprouts over six other competitors because we felt it brought something new to Eagle Rock that the community is truly excited about.” 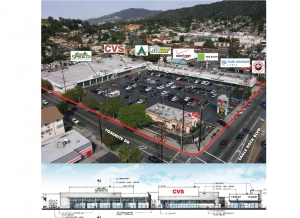